Every once in a great while, I sit down with a new software synthesizer (well, new to me that is) and I’m just floored by it in every way, shape and form. Mind you, I’ve been tinkering with VST instruments and effects for well over a decade, so trust me when I tell you that I’m not easily impressed, but I’m very impressed by Reveal Sound’s Spire. It’s everything I look for in a synthesizer, regardless of its classification.

Not only does Spire offer a wealth of features, but it provides access to those features in a manageable and beautiful interface, somehow keeping hidden pages and tree menu navigation down to a minimum, resulting in a fluid, unencumbered workflow. This is what I like to see. The controls are laid out in a very organized manner. I don’t feel overwhelmed or intimidated. I have no trouble keeping track of what I’m doing or what I was doing five minutes ago. I can go right to work and have fun while I’m doing it!

I must take a moment to circle the wagons in regard to Spire’s unparalleled tone, which is a direct result of enormous amounts of research invested in four expertly coded oscillators that just might be the very best (digital oscillators) I’ve laid ears on. Seriously, the bar is set extraordinarily high here. Each of these identical oscillators is indicated by four navigation tabs and dedicated amplitude knobs labelled “OSC1-4”. At the center of each oscillator is a display with a visual representation of the current running waveform, with pitch information directly associated with the “Note”, “Fine” and “Octave” parameters.

Each oscillator has its own unison engine with up to nine voices and a small handful of octaves and basic chord formulas in a drop-down below the Detune knob, which is somewhat self-explanatory, and the Density knob, which has a very special effect on the fine tuning of each unison voice. If the Density knob is turned all the way down, the unison voices are evenly tuned apart, but as you turn the Density knob up, you’ll eventually notice that the unison voices are unevenly tuned apart, which will add tons of character and charm to your detuned sounds. I would have liked to see an option for a global unison engine, which I usually complain about if it’s the only unison engine available, but in this case, I can’t complain too much, even though a global unison engine would substantially reduce CPU consumption.

The Signal Controls interact with the oscillator and unison parameters in a few different ways, entirely depending on the oscillator mode, phase, and filter settings. The “Pan” knob pretty much does exactly what you expect it to, while the “Wide” knob pans each unison voice evenly throughout the stereo field. The “Filter Input” parameter will either route the signal output to one of the two global filter modules or a mixture of the two, while each of the three buttons (ANA/INV/KEY) will either affect the oscillator phase, invert the signal output or enable MIDI pitch tracking for each oscillator. In Noise mode, the CtrlA knob (filter frequency cutoff) will not be noticeable until you disengage the KEY button.

There are two filters, each with five modes offering at least four different filter types, “Scorpio” mode being the only exception, which has six types. In “Perfecto” mode, there’s a 4-pole low-pass, high-pass and band-pass filter, and a peak EQ with a bipolar frequency “shelf” determined by the resonance knob. “Acido” mode has four low-pass filters, from 1-pole to 4-pole decibel per octave topologies. “Infecto” mode has a 2-pole low-pass, high-pass and band-pass filter, and a simple notch filter with a bandwidth control. As I’ve explained, Scorpio mode has six filter types, two being “Red” 2-pole and 4-pole low-pass filters, and the remaining four being “Black” 2-pole and 4-pole low-pass, and 4-pole band-pass and high-pass filters. The “Combo” mode has four basic comb filters with negative and positive feedback in either mono or stereo; these filters are perfect for physical modeling purposes if you want to create percussive drum sounds or emulate string instruments ala Karplus-Strong synthesis. I don’t see any saturation parameters within the filters, but the distortion algorithms in the “Shaper” effect will make up for a lack thereof. Also, the “Filter Balance” knob will crossfade between the two filter outputs, oppositely similar to the Filter Input parameter in the Signal Controls section. The “LINK” button will link the two filter cutoff controls, and the “PAR” button will switch between serial and parallel routing configurations.

Spire has four envelopes and LFOs, two step sequencers and a powerful modulation matrix with fifteen slots equipped with two sources and four targets. Each envelope has six stages; obviously, there are attack, decay, sustain and release stages, but there are also two additional stages acting as sort of a second decay and sustain, those being the “Slope Level” (SLL) and “Slope Level Time” (SLT) stages. Each envelope module offers a routing matrix with a compendium of target parameters available in the tree menu directly above and below the “Amt 1&2” and “Vel 1&2” controls, adjusting the overall intensity of each envelope’s signal and its influence on the two selected targets.

Each LFO has a wavetable like those in the oscillator modules, except for the Square, Sample & Hold and Sample & Glide waveforms. A “Form” slider will affect the shape of the waveform, which is offered as a target parameter in the modulation matrix… a feature I’ve actually never seen before! Above the waveform display, there are twenty-one time signature measures available in the drop-down next to the syncable “Rate” parameter, a “Phase” control that behaves just like the ones in the oscillators, and a “Symmetry” knob affecting the polarity of the current waveform. Also, there’s a routing matrix identical to those in the four envelopes, with Amount and Velocity controls with functions I’ve already explained.

The Stepper modules are incredibly flexible, with up to sixteen steps, each with their own wave editor offering click & drag waveshaping, copy and paste functions, an option to “Reverse” steps, a “Hold” waveform for immediate transitions ideal for gated sequences and four time divisions labeled “X1-4”. A knob beside the time signature display/drop-down will adjust the synchronization rate, for which there are three modes: Free, Sync and Spos (synchronizing both the speed and position of the Stepper in accordance with your host application’s current project tempo). There’s also a button that will “Loop” a sequence, or more specifically, set a looping stage within a sequence if the “Start” point is subsequent to the first step, but you won’t really notice any difference in the general behavior of the sequencer until you switch on the “Retrigger” button, which will iterate the sequence starting from step one, then loop between the “Start” and “End” points if the note is sustained. If you disengage the Loop button with the Retrigger button still engaged, the sequence starts and ends at the designated points without looping. 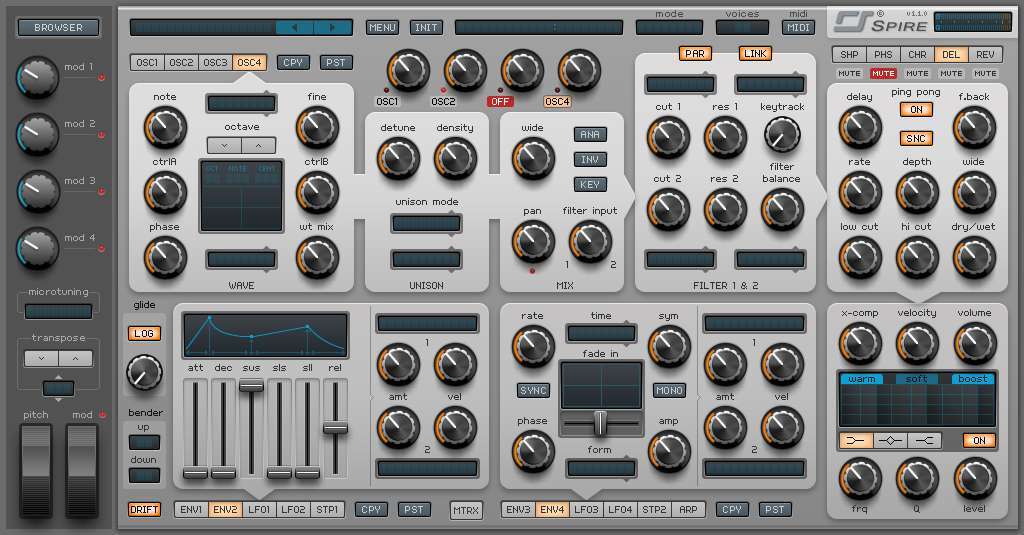 The Arpeggiator is surprisingly user-friendly and fun to use! It didn’t take hours of research and fiddling with the controls to figure out how everything works. I usually dread this part of the review, but I actually had a blast tinkering with the various arpeggiator modes. Obviously, there’s the tried-and-true patterns: Up/Down, Down/Up, etc. But there’s also Random, Ordered, Step and a Chord mode that will let you play multiple notes at once without disengaging the transposition of each note within the sequencer. Also, there are five velocity modes that determine the velocity of each note in accordance with MIDI note pitch or the velocity of the first played note, but the most useful option would be the Step mode, determining the velocity with the level faders for each step in the sequencer window. There are four octaves available in the drop-down labeled accordingly that will iterate transpositions of played notes in the order of the specified arpeggiator mode. The “End” drop-down provides up to sixteen values, even though I’m not sure I understand the purpose of a sixteenth end value, being that the sequencer will cycle through sixteen steps anyway without looping, but I’m splitting hairs at this point. The remaining controls are more or less self-explanatory, which is what makes Spire’s arpeggiator as intuitive as it is.

In the effects section, there are five modules with independent pages indicated by navigation tabs: a Shaper with eleven decimator and distortion types, a Phaser with up to six stages and three (vowel) formant filters, a Chorus effect with six algorithms including a flanger, a stereo Delay with host-syncable left and right delay lines, and a capable Reverb – which just so happens to be one of the most versatile native reverbs I’ve ever used – with a handsome variety of parameters including a syncable pre-delay, high-frequency dampening, coloration filter, a stereo widening control and two high-quality plate modes.

While improvements and bugfixes are mostly CPU relevant, there’s a considerable amount of new features on tap, including four assignable macro controls, microtuning, global transposition buttons and virtual mod/pitch bend wheels, all of which appear in the far-left panel. Unfortunately, most of these new features are not yet functional, and there are also quite a few limitations unrelated to the beta version. The focus of this update is on the DSP engine, which is almost three times more efficient than version 1.0.20. CPU intensive presets are now substantially more economic, which makes me very excited for the official launch of version 1.1… that we probably won’t see until next year. Also, we still don’t have a 64-bit Windows version of the public beta, which I’m fiercely anticipating.

Weighing in at just under a hundred dollar retail value, Reveal Sound’s 6-in-1 EDM Bundle can be had for a mere fifty dollars if you purchase Spire with the Complete Bundle (click on “Buy Now” for the ad) which includes “EDM Essentials Vol.1-4”, “Into The Deep”, and “Trance Essentials Vol.1” designed by Vullcan and Dallaz Project. The Complete Bundle offers 653 presets on top of five factory sound banks, equaling 1293 presets overall. EDM Essentials Vol.1-4 is a collection of exhilarating, club ready sounds including complex arpeggios and bass sequences, a versatile assortment of leads, otherworldly pads, plucks, stabs, a few dozen drums and huge, evolving riser effects. Although “Trance Essentials Vol.1” is similar, it focuses more on hypnotic gated sequences and dreamy supersaw pads. “Into The Deep” offers a handsome variety of synth chords, keys, and velvety bass sounds ideal for… well, “deep” house. I’m not big into using third party content, but I’ve got to admit that these are some really useful presets.

While it’s certainly no secret that Spire could benefit from a considerable amount of CPU optimization, there’s no denying that it’s still worth the hit. Fortunately, the beta version is shockingly more economic than the battle-tested, developer-approved version 1.0.20, which will inevitably crush any computational excuse you might have concocted to avoid having to drop everything and purchase Spire immediately. The sound quality alone is a guaranteed cure for “Analog Superiority Complex”. Seriously, once you’ve heard this thing firing on all pistons, you can dispel any prejudice you might harbor against digital audio. Spire is, in every way imaginable, a shining example of what a software synthesizer can and should be.

The sound quality alone is a guaranteed cure for “Analog Superiority Complex”. Seriously, once you’ve heard this thing firing on all pistons, you can dispel any prejudice you might harbor against digital audio. Spire is, in every way imaginable, a shining example of what a software synthesizer can and should be.