Edifier R1850DB stereo speakers promise great sound quality and excellent features at a budget price. Considering the company’s previous success with similar budget speakers, we wanted to investigate if these would be a good fit for a home music studio.

We previously reviewed the R1800BT speakers by Edifier. In a sense, the R1850DB model is a refreshed version of those speakers, with several improvements. Read more in the full review below.

It’s always annoying when a product arrives without a piece that’s necessary for it to work. You know, the dreaded “no batteries included” tag that you sometimes see on boxes of electric devices. Or that new $5,999 Apple display with a stand that needs to be purchased separately for $999. Thankfully, this is not the case with Edifier R1850DB speakers.

The box includes everything you’ll need to get your new pair of speakers running, and then some. In addition to the two speaker units, Edifier also provides a set of cables, a remote controller with included battery, speaker grilles, and a branded cleaning cloth (!). As for the wires, the box contains four in total: an RCA to RCA, a 3.5mm to RCA, a fiber optic cable, and a cable for connecting the two speakers. The only piece that would need to be purchased separately is the coaxial cable.

The speakers look very similar to the R1800BT model by the same company. The build quality is excellent, and the overall design is dark and classy. Edifier hasn’t used any accent colors but opted for a combination of several shades of matte blacks instead. Unlike the previously reviewed R1800BT model, the R1850BT features a textured surface which doesn’t attract fingerprints. The fingerprint-prone glossy surface was something we didn’t really like on the 1800BT model, so it’s great to see that Edifier made improvements in that department.

The physical size is pretty much what you’d expect from a pair of 4-inch bookshelf speakers. They don’t take up a lot of room, but they aren’t exactly portable, either. The size is compact enough to fit tighter bedroom studio setups. 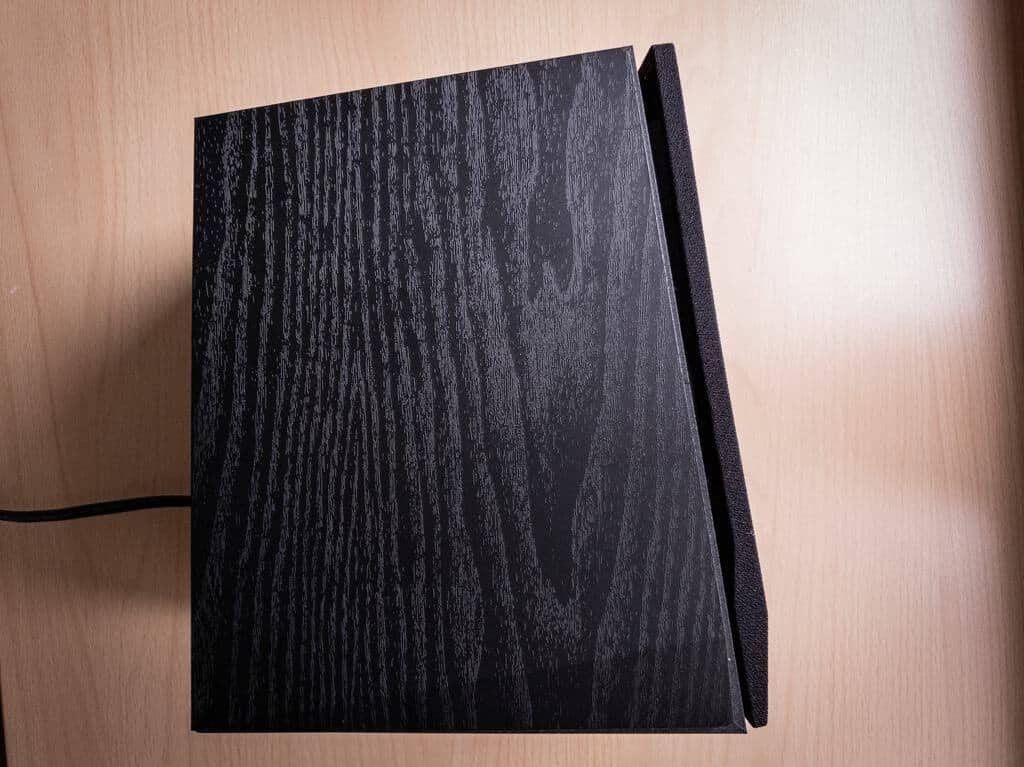 The speakers are set to a 10-degree vertical angle.

The housing is set to a 10-degree angle, which is supposed to help send the output directly to the listener’s ears. The vertical angle might be a benefit or a drawback, depending on the height of the surface the speakers will be placed on. It was a perfect fit for our test setup which consisted of a laptop and a soundcard placed on a relatively low computer desk.

The volume knob is located at the back of the active speaker, which is why the included remote control unit is such a lifesaver. Apart from adjusting the volume, it also controls the active input. Unfortunately, the two tone knobs can’t be controlled remotely. 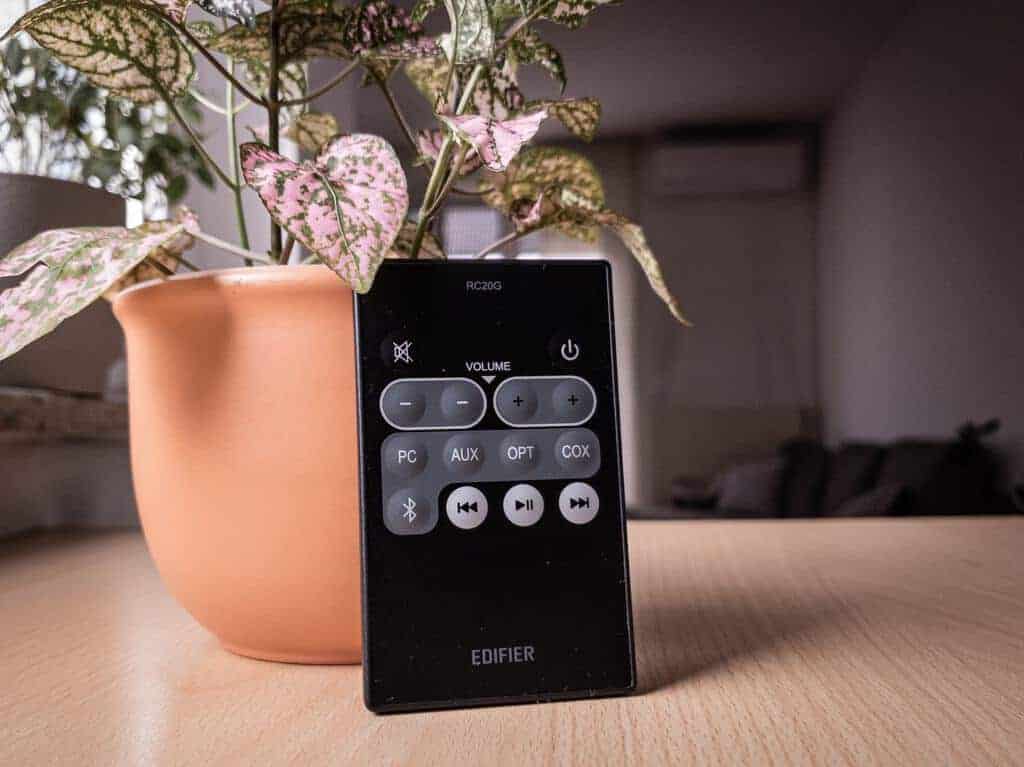 Overall, the speakers look excellent and are equally capable of fitting a project studio, a Hi-Fi setup, or a TV shelf. For laptop musicians or music producers with smaller project studios, these speakers should fit the bill size-wise.

The input ports on the back make Edifier R1850DBs compatible with almost any type of audio device. The speakers feature dual stereo RCA inputs (PC and AUX), optical audio input, and coaxial audio input. The Bluetooth connectivity expands the unit’s compatibility to a range of portable devices like smartphones, tablets, and laptops. 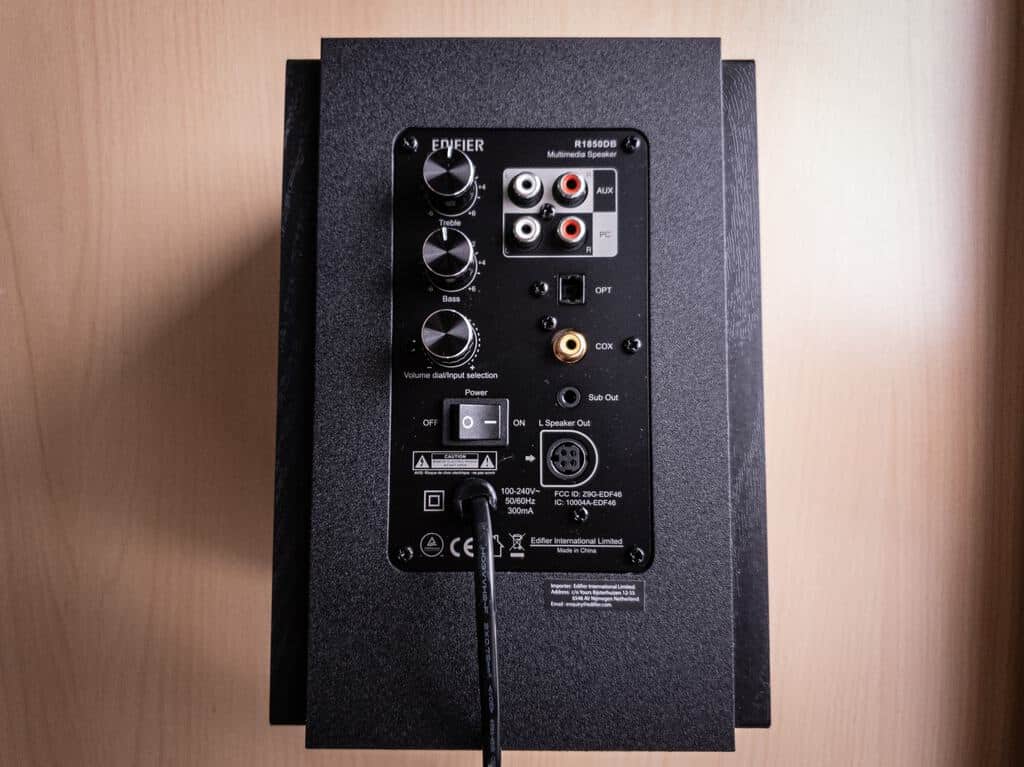 The input ports and control knobs are found on the active speaker’s back panel.

Also located on the backside of the active speaker are the subwoofer out port and the port for connecting the second speaker unit via the included cable. The speaker connecting cable is 5m long (16ft), which should be plenty enough for almost any type of setup.

Edifier is a company known for manufacturing speakers which sound better than their price would suggest. The R1850DB speakers don’t disappoint in that regard. Out of the box, the sound profile is somewhere between a bookshelf speaker and a monitor, with slightly boosted highs and lows. The mid frequencies are crisp and detailed. According to the specs, the speakers have a frequency range of 60Hz-20kHz which is extendable by adding a subwoofer. We only used the speakers as a stereo pair without a subwoofer unit.

The overall balance can be fine-tuned using the 2-band tone control on the back of the active speaker. With a bit of patience and effort, the sound can be balanced enough to make the R1850DBs suitable for handling music production and mixing. Paired with a decent pair of studio headphones, the Edifier R1850DB speakers are a reliable entry-level monitoring solution for a budget music production studio. 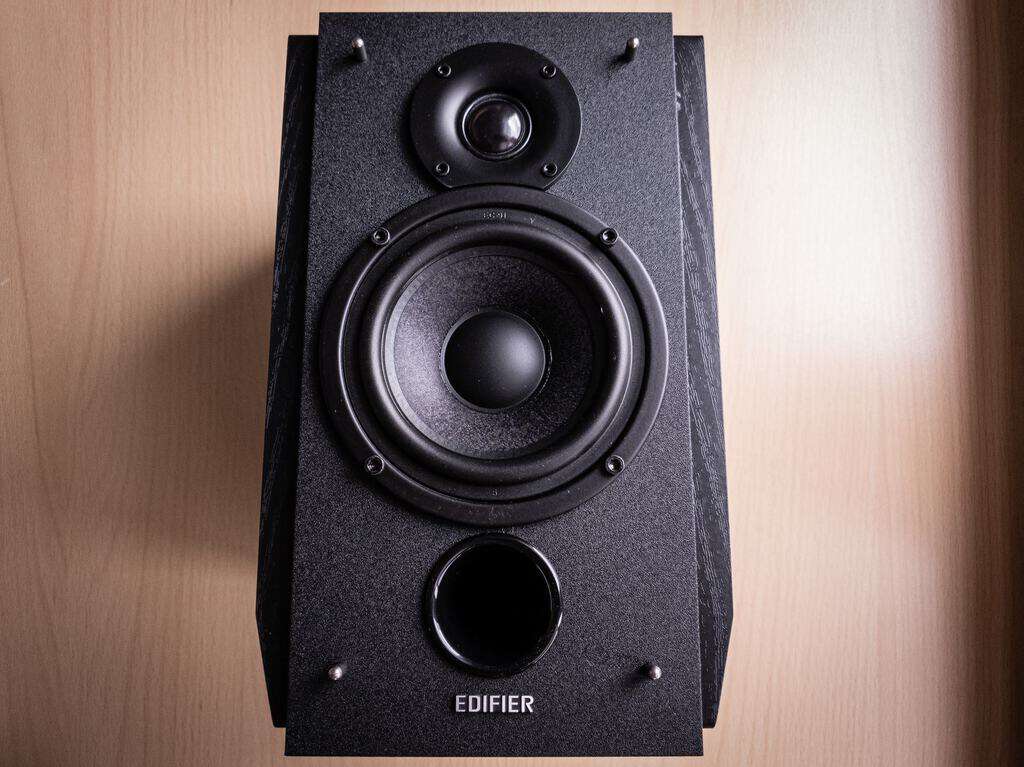 As for the output level, these speakers can get seriously loud. What’s somewhat surprising considering the price is that they don’t distort even at higher output volumes. The sound quality remains undistorted and smooth, although the balance will shift towards the upper end of the frequency spectrum. For music production and mixing, it is recommended to use lower volumes.

Being that we’ve already reviewed R1850DB’s younger sibling, the R1800BT, we suggest taking a closer look at that article for a more in-depth analysis of the unit’s sound.

Priced at $199, Edifier R1850DB is a seriously good deal. If you need a pair of budget speakers for producing music, these are worth looking into. They deliver surprisingly detailed sound for the price and the frequency balance can be tuned to fit any type of room. Of course, professional mixing is out of the question without a proper monitoring solution. But for composing music, beat making, recording and editing audio, or handling any similar audio-related task, we can only recommend the R1850DBs as a great budget solution.

We can recommend the R1850DBs as a great budget solution for composing music, beat making, recording and editing audio, or handling any similar audio-related task.