We are reviewing the Spacerek (€79 value) virtual space reverb plugin, which was recently released by D16 Group.

I must admit to having a soft spot for D16 plug-ins, particularly the effects. It doesn’t take much to picture each, and every one of them as real hardware units racked up in my little studio, making it glow and bleep like a NASA communications room.

It certainly helps that D16 Group plugins sound just as good as they look. If they were real hardware, they’d probably cost north of EUR 3000 apiece. But since these are VST plugins, they are available at a fraction of that cost. Sublime!

Spacerek is D16 Group’s latest creation and the Polish developer’s second reverb plug-in. Although it shares some of its core concepts with Toraverb 2, the new Spacerek plugin really is a beast of its own.

The two D16 reverbs may be similar in terms of the precise control they offer over late and early reflections, along with capable EQ. However, Spacerek’s reverb engine and architecture are completely different, making for a powerful outcome.

Spacerek is built on a hybrid algorithm that moderates the complex interactions of two main components – a virtual space simulation and a dynamic delay network.

The former is responsible for the Early reflections, generating them through virtual speakers and microphones positioned within a simulated acoustic space. The latter handles Late reflections by self-aligning its parameters along with the acoustic properties of the simulated space.

A tilt-type EQ with adjustable frequency and slope controls and a low-cut filter with mid/side functionality complete the signal flow. Whatever intricate number crunching happens behind the scenes, the result is deep, and realistic-sounding stereo reverbs at much less CPU and disk space cost than alternative approaches like convolution.

You’d be forgiven if you went straight to the presets, of which there are expectedly many. But Spacerek’s clearly laid out controls, and its exciting algorithm would soon compel you to try and roll your own reverbs.

Your first stop would be the Reverb Model section. A click into it lets you choose the reverb model, or in other words, the reverb’s character. While clicking through several models until you hear one that sounds right will suffice, understanding the naming convention is particularly helpful.

Each model is marked with Room Name, Speaker setup number, Microphone setup number, and Stereo mode (L-R or M/S) information. This information is reflected inside the visualizer, which provides a handy overview of the speaker positioning within the virtual space, its properties (Width, Length, Scatter, Damp), and the stereo microphone configuration.

This is remarkably useful information, but my advice is to let your ears and intuition be the judge. 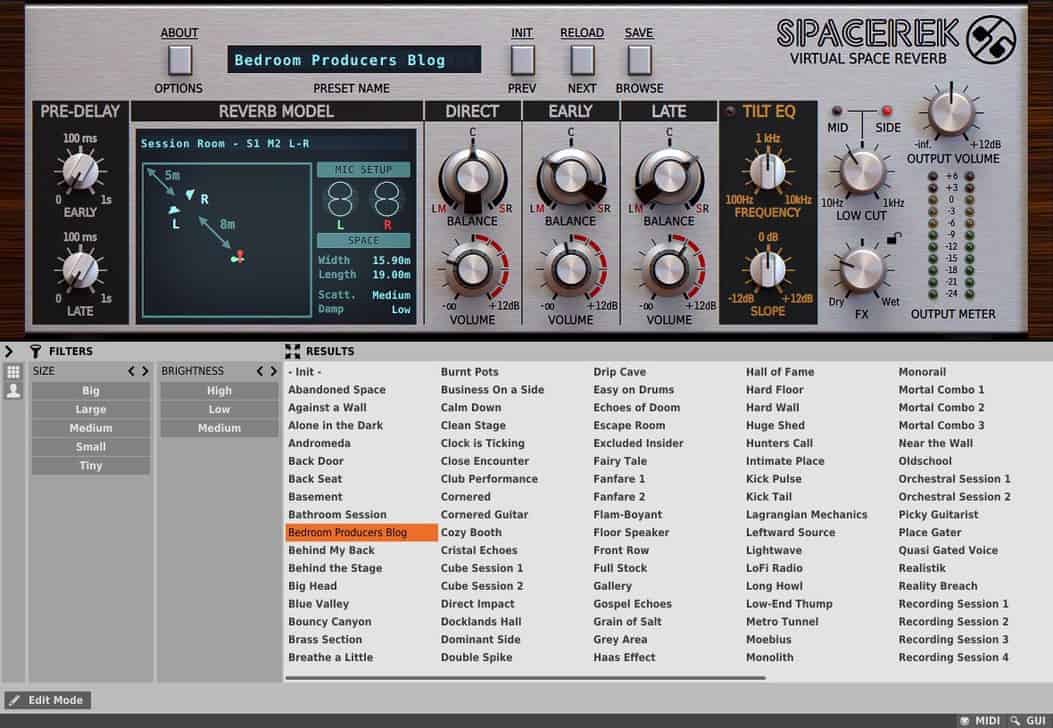 Looking at that visualizer, I expected the ability to click and drag the speaker symbols around the virtual space. For better or worse, that’s not a possibility. Personally, I find having this much freedom generally leads me towards over-tweaking. However, I think such functionality would have served as a terrific showcase for the reverb engine’s prowess.

Once you’re set on a reverb model, it’s time to twist it around to conform to your production. This is where you enter more familiar reverb territory.

This is the kind of fine but not overwhelming control that’s very typical of D16 plug-ins.

At the end of the signal path is a simple tilt equalizer. One of the more under-utilized types of EQ, think of it as a diagonal slope hovering over your audio’s frequency spectrum. Tilt it to the left, and you cut low-frequency content while boosting high frequencies. Tilt it to the right, and it’s the opposite. The provided Frequency and Slope controls are more than enough for this kind of equalization.

The equalizer is followed by a low-cut filter that can process Mid and Side stereo components individually or simultaneously. Add the compulsory Dry/Wet blend knob and a final Output Volume control, and Spacerek is complete.

Knowing D16, I expected a high-quality reverb, and Spacerek does not disappoint. While Toraverb 2 is a bit out there, bordering on the rowdy and experimental, this is a comparatively clean and gentle reverb that’s nevertheless capable of beautiful sounds.

The modeled spaces are spot on, and that delay network sure goes a long way towards conjuring the echo-y and the ethereal out of the plug-in. Though, for grimy spaces, I’d have to throw some destructive processing on top or go elsewhere.

Still, even though I understand D16’s “less is more” approach, I can’t help but feel Spacerek is a mere glimpse at the potential of one monster reverb algorithm. I’m convinced that an ‘XL’ version with adjustable speakers, delay network controls, a parametric EQ, and a limiter at the end would absolutely slay!

And why not throw in some modulation to make it even more fun? Okay, enough is enough. Let’s see what the future brings…

The software is available in AU, VST, and AAX plug-in formats.

Spacerek is a clean and gentle reverb that's nevertheless capable of beautiful sounds. The modeled spaces are spot-on and the delay network goes a long way towards conjuring the echo-y and the ethereal out of the plugin.