GSi has released VariSpeed, a freeware emulation of the WEM Copicat IC400 tape delay unit in VST, VST3, and AU plugin formats for 64-bit DAW software on PC and Mac.

VariSpeed emulates the Watkins (WEM) Copicat IC400 tape delay, one of the most sought-after vintage tape delay units. The IC400 was WEM’s first echo machine. The unit is known for its variable-speed belt drive motor, which, as the moniker “VariSpeed” implies, allows the IC400 to change the delay time.

The original Copicat IC400 is unusually flexible for a vintage tape delay unit. It can pull off short slapback delays and groovy off-beat delays with ease. IC400’s secret sauce, though, are those never-ending swirly echo swells that can take a life of their own.

Sometimes I think it would make more sense to describe a tape delay as an instrument rather than an effect. Seriously, the range of sound effects one can build using a single sound source and a capable tape delay unit can often rival the flexibility of a basic subtractive synthesizer.

VariSpeed’s interface design is heavily inspired by the original Copicat IC400. It even shows an animated tape loop that moves slower or faster, depending on the Varispeed knob setting.

The user can adjust the input signal for the left and right audio channels, the motor speed (delay time), repeat rate (delay length), swell (delay level), and the tone. The green, white, and red buttons toggle the three delay pickup heads. An on/off switch is also included as a quick and easy bypass method. 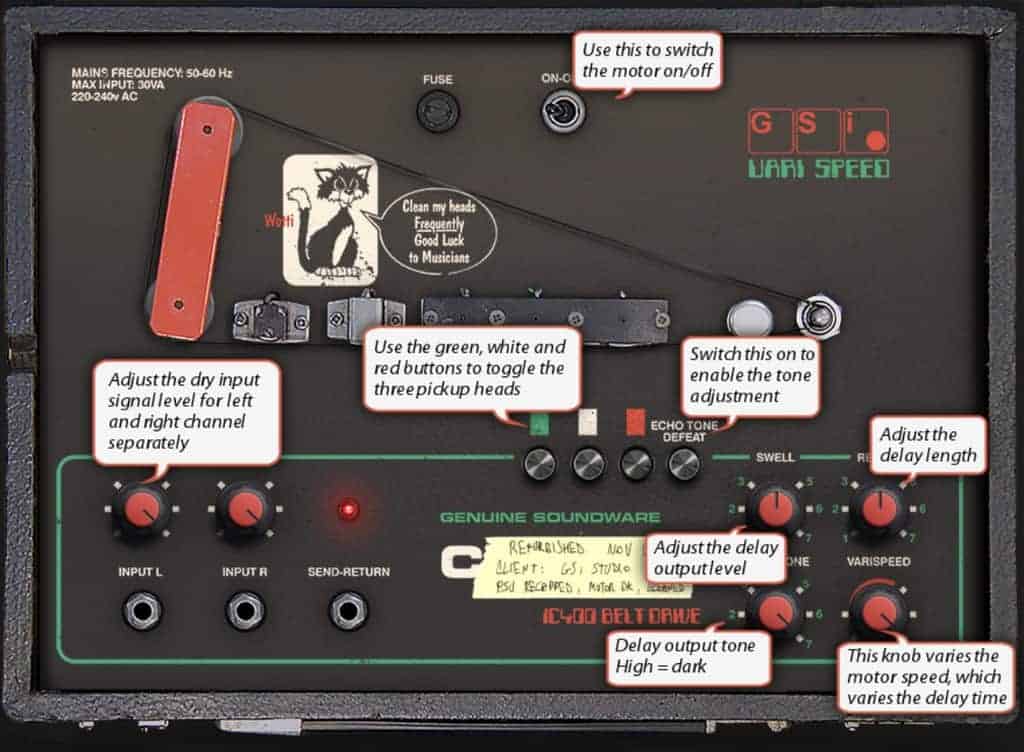 GSi VariSpeed features a help overlay which describes each control.

It is also worth noting that the GUI is freely scalable from 100% to 130% of its original size. The developers also provided a handy help overlay (pictured above), which describes each control parameter’s functionality.

If you’re a fan of vintage tape delays, don’t waste your time and download GSi VariSpeed right away. It’s one of the best freeware delay plugins in a long while. While you’re at it, why not check out Wavesfactory’s discounted Echo Cat (currently on a 50% OFF sale at Plugin Boutique, partner link) tape delay plugin, too?

VariSpeed is available for direct free download from GSi’s website; no signup is required. The downloaded ZIP archive contains an EXE installer that extracts the plugin files to the correct hard drive location. Optional, users can submit a donation to support the developer’s work.

You can use VariSpeed in all 64-bit VST, VST3, and AU plugin hosts on PC and Mac. A standalone version of the effect is also available.