Spaced Out by Baby Audio is a sleek space-age fusion of delay and reverb units. Read our Spaced Out review for more info about this simple yet innovative delay plugin.

Judging by the interface alone, Spaced Out seems at least as funky and cool as Comeback Kid (or its freeware sibling Baby Comeback), Super VHS, and Parallel Aggressor.

To Infinity and Beyond!

It would be unfair to call Spaced Out just a reverb or just a delay; it’s an original and unique multi-fx unit inspired by the old-school 1950s Space Echo.

Spaced Out: A Space-Age Multi-FX Unit

Spaced Out taps into a diverse sonic palette of delayed and reverbed fx that can be tempo-synced using its innovative 16-step delay sequencer.

It fuses this 16-step delay sequencer – which is in many ways its USP – with a crystal-clear reverb unit. Wet/dry ratios are controllable via the central mixer. 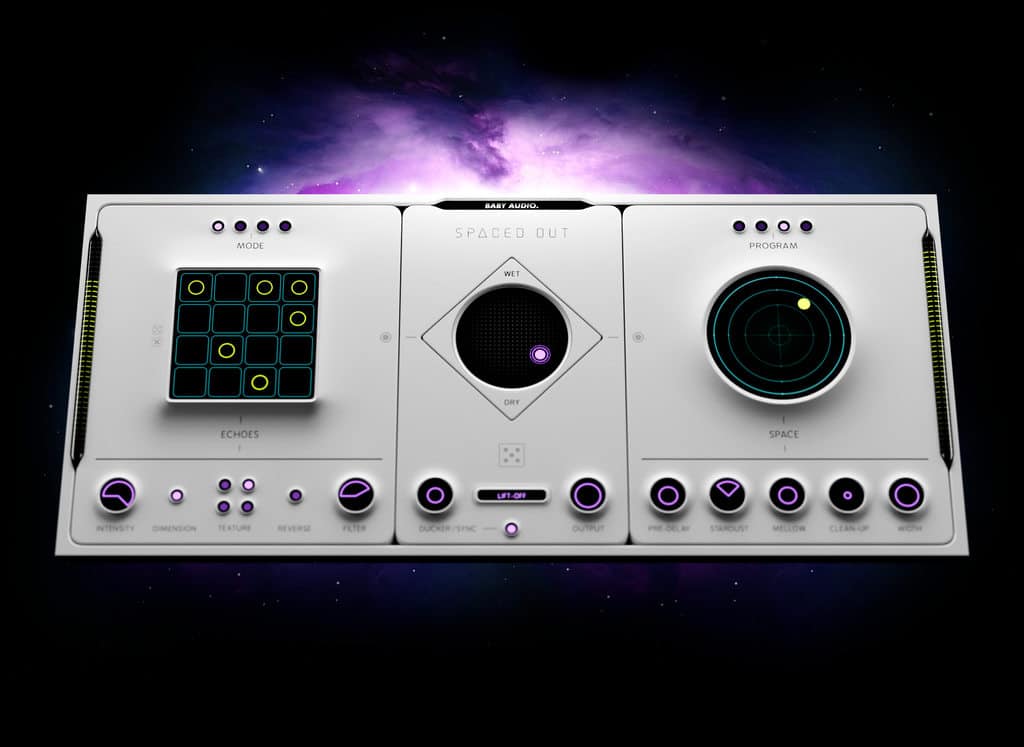 Spaced Out offers the classic Space Echo vibe with a modern twist.

With a simple, intuitive interface and a handful of cleverly chosen futuristic buttons and features, Space Out nails the retro-future aesthetic and is immediately inviting as a plugin that you want to experiment with.

Let’s kick it off with mission control – the central mixer.

The X-Y joystick control lets you blend Echoes and Space – or not blend them at all. You don’t have to combine your signal with both units; you can only use one if you wish and can even totally deactivate the other.

The dice graphic, ‘generate,’ is a randomizer – pretty cool for looping a track and quickly cycling through different sounds and effects.

The Echoes unit is the main event – the headline act. Each slot can be activated by clicking on a square that will trigger a delayed signal. A large circle denotes a full accent, whereas a small circle denotes a lower accent.

You can set the Echoes unit to straight notes, 2x double time, dotted, or triplets. There’s a ton of potential – everything from subtle accents to full-blown syncopated rhythms is possible.

Throwing Space Out on a drum loop and messing about with the 16-step sequencer provides instant inspiration. Space Out effectively animates loops with its clever mixture of reverb and stereo delays – now things are getting spacey.

For synths, pads, vocals, and other lead or melody parts, you can use the sequencer to emphasize the beat’s pulse and nuance. You could send tracks to an AUX bus with Space Out loaded to add subtle rhythmic effects to a whole bunch of tracks.

The ability to control these short delays using accents in a sequencer-style interface is very cool. It’s much more efficient than building your own FX using separate delays and reverbs.

A Constellation of Controls

The five controls at the bottom of the panel are Intensity, Dimension, Texture, Reverse, and Filter.

Dimension has Ultra-Wide and Motion settings for juicing up your tracks with some stereo effects and panning.

Motion brings out the rhythmic potential of the 16-step sequencer, converting basic beats, vocals, and synths into flowing, organic textures that glide between the left and right channels.

Texture allows you to select from Clean, Wonky Tape, Lofi, and Hazy delay tones – you’ll only hear a pronounced difference with a wet signal.

The Filter uses the same moon-like control as Intensity, with the LPF on the right side of the circle and HPF on the left side.

The top selector lets you choose the room type, ranging from Vacuum to Small, Medium, and Outer Space.

All Around the World

The reverbs pop up as Alien, Trippy, Cosmic, and Lush – defining the characteristics of each is pretty much impossible, but they sound fantastic.

It lets you adjust the reverb pre-delay – measured by percentage and not milliseconds, which is slightly unusual – though the manual says that the top limit is 250ms.

Stardust is the reverb unit’s ‘secret sauce,’ so to speak, and they don’t give away too much about what it does. As far as I can see (and hear), it adds a shimmery high-frequency decay tail to the reverb. It’s pretty subtle but definitely works on the high frequencies only to provide some sort of air to the reverb.

Another moon-esque control, Mellow controls the low and high-end content of the reverb.

Clean-up seems to remove muddy mid and low-end from the reverb. I think it’d be particularly effective for parallel processing – sounds brilliant on melodic sounds like pads, strings, and other synths.

A self-explanatory stereo width control. Combine this with Motion on the Echoes module for some pretty crazy ultra-wide ‘beyond the stereo field’ effects.

Spaced Out: The Lowdown

Spaced Out ($39 on sale) is clean, innovative, creative, and sounds incredible.

Baby Audio’s delay plugin ticks many boxes and can easily replace separate delay and reverb units. You can also strip away the need for automation – the 16-step sequencer takes care of that for you. It definitely carves out a unique space for itself and is a more-than-worthy addition to any collection of delay and reverb units.

Spaced Out’s dark skin is the perfect fit for those late-night mixing sessions.

Space Out is capable of very expressive, big spacey reverbs, but actually, I can foresee myself selecting this plugin for its creative nuances. It’s especially useful at gluing sounds together with harmonic and rhythmic interest and can be used subtly for parallel processing.

That said, it does have some radical elements also. It’s a fusion of worlds, a near-perfect harmony of reverb and delay orbiting each other with the kind of minimalist synchronicity we’ve come to expect from Baby Audio’s compact selection of modern sound design tools.

Sam is a drummer, audio producer, and writer from London, UK. Often found nodding his head to funky beats and jazzy riddims.