For the first synthesizer round-up in our directory of freeware VST plugins, I’ve decided to try and make a list of the best free subtractive synthesizer plugins for Windows and Mac.

The goal was to include all of the relevant freeware subtractive synthesizers, picking the plugins which have at least two of the following qualities – great sound, powerful feature set, low CPU hit, and/or a large amount of available user-made presets.

Note that I’m using the term subtractive a bit loosely here – some of the included synths can do a whole lot more than just subtractive synthesis, while some others are indeed just simple virtual analogs. This sort of classification is a convenient way for me to organize things a bit, so that I don’t simply put all the good freeware synthesizers into one huge mess of an article.

It’s really hard to pick a favorite from the list above! I actually use quite a few of these synths on a daily basis – most of them come with one or several features that I can’t find in other synthesizers. In the rest of the article, I’ll write a bit more about the ones I use most often, and also provide links for some of my favorite banks, presets and add-ons for these awesome freeware synths.

Urs Heckmann and Amazona.de shook the freeware world recently with the great sounding Tyrell N6 synthesizer. It was designed by the members of Amazona.de online community, and then programmed by the chief developer at u-he. It sounds great, works very well, and will also provide a decent cardio workout for your machine’s CPU. ;] A pack of free Tyrell N6 patches from the KVR patch contest is available for download here. And thanks to KVR’s One Synth Challenge, you can hear some music made using Tyrell N6 only by clicking here. 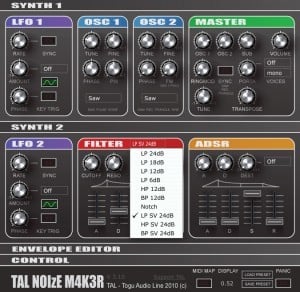 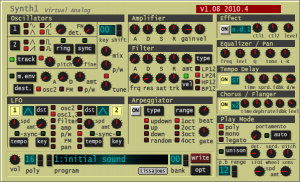 There’s not much I can say about Synth1 that you don’t already know. A legend among freeware synths, with thousands of available user-made presets and the recent updates which allow browsing through all of those banks and presets more easily, this little Nord Lead clone is a great source of quality sounds for your tunes. The pre-installed sound bank may sound a bit disappointing, but the actual sonic range of this synth is simply astonishing. There’s an old Latin proverb that says Synthus Unus cum omnia potest, si peritiam (meaning Everything can be made with Synth1, you just need to pratice more). When it comes to free presets, my personal favorites are Mr Wobble vol. 1 & 2, and Ann Preset Banks 1, 2 & 3. For a set of tracks made using Synth1 only, click here. 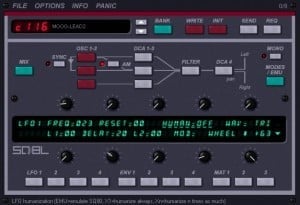 Another synth that I seriously love using is SQ8L, an emulation of the Ensoniq SQ-80 hybrid synthesizer (and a pretty close emulation, as often reported by the owners of the original harware synth). It comes packed with two banks of lovely retro sounds, and the fact that it also loads the original SQ80 Sysex patches is what makes it my ultimate favorite 80s machine. And here’s the SQ8L One Synth Challenge page. 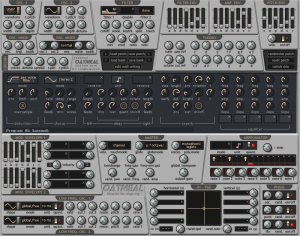 Reading the headline of the thread in which fuzzpilz announced the release of Oatmeal on KVR Forums, it would be hard to guess that it will quickly become one of the most popular freeware synths around. But the reality is that Oatmeal packs a set of pretty interesting features (X-Y pad, custom waveforms!) and it also looks rather nice, thanks to Limeflavour’s awesome design skills. An all-in-one bundle (conatining skins, banks and patches) is available here. 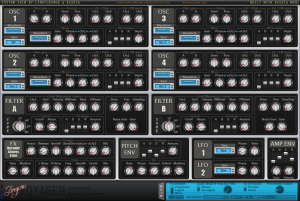 Another favorite of mine is Voyager, a very nice sounding virtual analog synth which also features a neat built-in vocoder (it’s been featured in BPB’s best free vocoders list). People are often not very fond of the original GUI (although I actually use the default skin and really like it), so you might want to check out the updated Voyager skin, as well as a free pack of presets, on Limeflavour’s blog. Anyway, looks aside, thanks to its four oscillators and a set of nice and soft sounding filters, Voyager works great for creating rich and lush sounds, evolving pads, etc. More free presets for Voyager are available for download here and here. 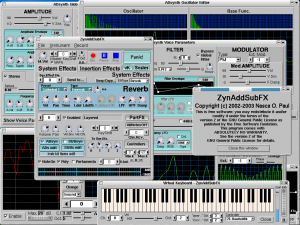 Not for the faint of heart, but ZynAddSubFX is probably the most powerful synth on the list. Featuring three separate synthesis engines (one of which is subtractive), a range of effect modules, as well as microtuning, this one is for the synth wizards among us. If you find yourself having trouble taming this wild beast, perhaps a tutorial like this one will help speed things up a bit. To hear some music made using ZynAddSubFX only, click here. 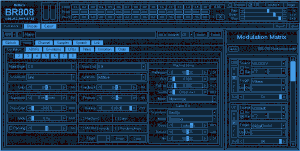 Somewhat less complicated for use than ZynAddSubFX, yet also very powerful – Benjamin Rosseaux’s BR808 features a mod matrix, 8 oscillators per instrument, freeform envelopes, a speech synthesizer (!), and a hole lot more. Note that it’s currently in BETA and that it might go commercial once officially released. A little tip for new users – the output level is set to -inf dB by default and you’ll have to manually turn it up in the Instruments/Global section! 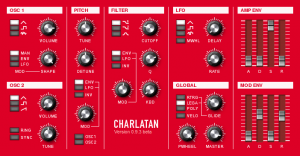 And of course, my recent favorite – the lovely sounding Charlatan by Dominique Wurtz. There’s a certain something about this synth that just makes it sound so organic! The oscillators are great, the filters sound very nice, and the limited feature set forces you tweak the synth to its limits, trying to get the best of it. Sometimes having only a basic set of features at disposal is actually inspiring rather than limiting – I’m seriously enjoying creating new patches for this synth on a daily basis.

Finally, many thanks to Jimmy James and mono for suggesting Abakos!

To conclude the article with some practical examples, here’s a nice video presentation of the Tyrell N6 synthesizer:

So that’s all for now, but feel free to suggest your own favorite free virtual analogue synthesizers in the comments section below.

Also, please support BPB by sharing a link to this article on your favorite forums, social networks, etc (you can do that easily by using the sharing buttons below). Now go and make some great music with these awesome free synths!

Tomislav is a journalist, music producer, and web designer from Belgrade, Serbia. He is also the founder and editor-in-chief here at Bedroom Producers Blog.